Home General-Herbs Turmeric: Is It the Next Miracle Herb? 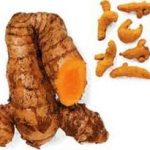 Turmeric has been a staple in Southeast Asian cuisine for centuries. The spice is member of the ginger family, and is typically used as a powder. Turmeric is extracted from the herb Curcuma longa, and is what lends the bright yellow color to traditional curries and other dishes.

In addition to culinary purposes, turmeric is also widely known for its medicinal capabilities and has been used in household remedies throughout India and China for ages. Turmeric’s healing capabilities are mainly attributed to its active compound, curcumin, which is found in abundance in the spice. Curcumin is known for its anti-inflammatory properties, and is said to be just as effective as aspirin and other over-the-counter pain relievers, but without any of the harmful side effects.

Turmeric is also used as an anti-septic, both local and internal, as well as to treat digestive disorders such as indigestion, diarrhea, heartburn and colic. The spice stimulates bile production and returns intestinal bacteria to normal levels, thus is used to treat digestive illnesses that are caused by toxins from bacteria and parasites. Likewise, turmeric has been administered to treat the common cold and its side effects, such as cough, fever and sore throat.

Southeast Asian women use turmeric to treat skin problems such as irritation, acne and insect bites. They make a paste out of the spice and apply it to hands, feet and other problem areas. Indeed, turmeric is used today in many cosmetics, creams and other beauty products.

In addition, turmeric has also been shown to have positive effects on the liver. Its powerful antioxidants and detoxifying properties cleanse the blood, making it a common treatment for hepatitis and other disorders that damage the liver. It also stimulates the circulatory system, making it an excellent treatment for hihg blood pressure and cholesterol.

Because of it stimulates the body’s immune system, turmeric has even been linked to the prevention and treatment of cancer. This is due to the fact that cancer rates in India, where the spice is consumed daily, are a fraction of what they are in the Western world. Turmeric has been shown to slow the growth of tumors, particularly those located in the breast, stomach, esophagus, mouth and intestines. Because turmeric is absorbed into the lining of the colon, it is also being studied as a possible treatment for colon and colorectal cancers.

Other diseases and disorders that have been shown to improve with the use of turmeric include arthritis, diabetes, Alzheimer’s disease and multiple sclerosis. Turmeric also inhibits the replication of HIV, promotes wound healing, prevents cataracts, inhibits pulmonary toxicity and fibrosis and improves mental functions.

Turmeric has been considered safe for consumption. In larger doses, turmeric, or more specific, curcumin, has been shown to interfere with drugs such as aspirin and other NSAID pain relievers. This is due to its blood thinning properties, and, therefore, shouldn’t be used with these medications. Turmeric shouldn’t b e taken in large doses by women or are pregnant or nursing. In addition, curcumin may also lessen the effects of chemotherapy, radiation and other cancer treatments. Due to possible drug interference, it’s important to talk to a doctor or pharmacist before taking turmeric for healing purposes.

From acne to cancer, turmeric has been shown to prevent, contain and treat a variety of diseases and disorders. While more research and experimentation is needed, there is an abundance of evidence pointing to the fact that turmeric could very well be the next miracle herb.