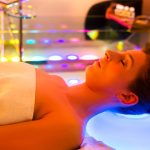 Color therapy is not new. It has been used in Eastern medicine for thousands of years to cure illness by using the frequency and vibration given off by different light spectrums. Eastern holistic practitioners believe the energy from light sources corresponds to energy in the human body. If centers of energy, called chakras, become blocked, illness develops. Theories on color therapy didn’t emerge in the United States until the 19th century when an American surgeon used different colored light to heal patients after surgeries.

An examination of everyday language illustrates the unconscious effect of color on a person’s well-being. People often refer to feeling blue when depression strikes. The color blue is associated with calmness, which might explain why depressed people sleep more. Research studies show respiration slows down and blood pressure drops when study participants are exposed to the color blue. An experiment in London further revealed how blue affects the mental state. Bridges in the city previously painted black were changed to blue. After the switch, 34 percent fewer suicides were reported by depressed people jumping off bridges.

Other common terms refer to a red-hot mama or seeing red. The color red is known to stimulate sexual glands and activate certain regions of the brain. When people are exposed to red, their heart and breathing rates increase, along with blood pressure. Combined with orange and yellow, red is known to increase appetite, a reaction used by fast food restaurants when designing colors for restaurants. Pink serves the opposite function by decreasing appetite and producing a calming effect. Experiments at prisons and mental institutions show fewer incidents of aggression when inmates and patients are surrounded by pink. The term looking at the world through rose-colored glasses imparts a sense of calm and that all is right in the universe.

Color therapy used in the psychiatric field employ glasses with different lens or direct light focused on the eye via instruments. An American psychiatrist began using color therapy with mental patients in the 1930s by using different colored-lamps. He saw improvement in patients suffering from bi-polar disorder, schizophrenia, and depression. One theory for the results hinges on the ability of color to release repressed memories connected to behavioral problems. Some neurologists believe different hues activate regions in the brain that regulate conscious and unconscious memories. When colored light enters the body through the skin or eye, nerves carry it to specific glands in the brain causing physiological effects.

White light emitted by the sun contains every color within the spectrum. Most people feel happier on a sunny day, especially after a long winter without sunshine. Scientists coined the term seasonal affective disorder to explain the increase in reports of depression during winter months. Studies also show people who work the night shift and sleep during the day report feeling depressed more often.

Some people use color therapy when selecting clothing and choosing paint colors for their homes. If they want to enjoy relaxing baths at home, they might choose green for the bathroom. On a day when an important business meeting is scheduled, a person might don a red outfit to invoke energy and stamina. Red can also be used in the bedroom to enhance sexual experiences. School teachers might consider wearing blue clothing if the classroom is disrupted by hyperactive students because blue produces a calming effect. And, since yellow might improve memory, it is no coincidence that legal pads used by lawyers come in that shade.