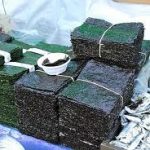 Grapes and seaweed are two of the most widespread foods on the planet. While they differ in taste, texture, nutrient profile and how they are grown and harvested, these foods both have remarkable health benefits and should be incorporated into the diets of those who wish to improve their health.

Grapes show tremendous antioxidant properties. In addition to common antioxidants such as manganese and vitamin C, grapes also contain several antioxidant phytonutrients. Antioxidants have been shows to improve cardiovascular health and reduce the possibility of developing cancer. Grapes have also been shown to have anti-inflammatory properties, which complements the health benefits of antioxidants.

Grapes have been demonstrated to help with brain health. Tests have shown that eating grapes causes cognitive test scores to increase. While the exact reason for this increase is under debate, many propose it is due to grapes antioxidants, but other theories have been argued as well. Grapes also display antimicrobial properties. Whether this has an impact on the prevention of food-borne diseases has not been established, but many experts propose that a positive benefit is likely.

But where grapes really shine is in their ability to help promote heart health. Grapes have been shown help regulate blood pressure; in fact, they are one of the best foods to reduce high blood pressure. Grapes reduce the rate at which cells adhere to the walls of blood vessels, which reduces the risk of heart disease. They also reduce excessive clumping among platelet cells.

It should be noted that grapes are high in sugar and certain types of fat. For those trying to control their weight, it is important to notice the calorie contents of grapes and act accordingly. Fortunately, grapes have a low glycemic, which means that they have a beneficial impact on the body’s blood sugar.

Even though it is commonly eaten in east Asian and other coastal regions, the thought of eating seaweed stills causes puzzled looks for many in North America and Europe. The popularity of sushi has increased awareness, but most still know little about its health benefits.

Seaweed is categorized by weight loss experts as a “free food.” Its caloric and fat content is so small it can safely be ignored by those counting calories; in fact, many feel that the amount of calories the body uses to digest seaweed is greater than the amount of calories it contains, making it a “negative calorie” food. Further, seaweed contains a nutrient called “fucoxanthin,” which has been shown to prevent to accumulation of body fat in animals. Further research is necessary to establish whether or not this effects also occurs in humans.

Beyond its weight loss benefits, seaweed is remarkable rich in vitamins and other nutrients. Typical of vegetables, seaweed contains vitamins A and C. But because it grows in the ocean, seaweed also contains less common nutrients such as vitamin B-12, calcium, iron, magnesium, iodine and potassium. Its nutrient profile make seaweed one of the most useful foods for vegetarians and vegans to eat.

Seaweed’s high potassium content gives it a salty flavor. Most people eat far too much sodium in their diets, and seaweed can play a valuable role in satisfying one’s “salt tooth” without the negative health risks of excessive sodium intake. Seaweed is also high in soluble fiber, which helps regulate the digestive system. Fiber also slows down the rate at which food is digested, which helps to prevent blood sugar spikes and gives the body a more stable influx of nutrients. It is often said that most people are not getting enough fiber; seaweed can be a great source.

It is often assumed that healthy foods do not taste good. Grapes and seaweed both refute this notion by satisfying one’s “sweet tooth” and providing a healthy source of salty flavors. Whether eaten as a snack or as part of a larger meal, these two foods are both healthy and delicious.